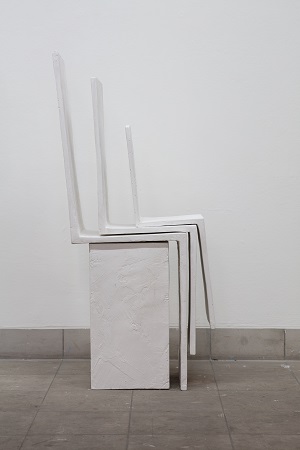 Inge Mahn’s works are based on everyday objects and basic constants of architecture. By means of raw modelling, she translates these elements into her own form, placing them in a new context.

Her sculptures explore existing social conditions and discuss political and structural manifestations of power. In addition to this political dimension, Mahn tackles fundamental questions of sculpture. In the often fragile-looking constructions she plays with relations of forces, the moment of falling over and destruction. Her column or stair sculptures do not serve any load-bearing purpose but are instead fragile structures held together partly by ropes and expanding into three-dimensional space. Sitz auf Sitz auf Sitz from 1991, that was added to the LÜTZE collection in 2010, is one such white plaster sculpture consisting of multiple parts. The three “seats” are stacked one on top of the other and rest on a rectangular base. Although the different-sized parts engage in each other in this fragile construct, the different angles and the uneven, rough surface run counter to the harmonious stack of the three seats. Several unique objects merge to create a sculpture that echoes the mediaeval subject of Saint Anne and the Virgin and Child. In this way, the sculptor renders everyday objects individual and couches universal questions of community and individuality in a dynamic artistic form.

lnge Mahn (*1943 in Cieszyn) studied at Düsseldorf Art Academy and was a student in Joseph Beuys’s master class. From 1987 to 1993 she was professor of sculpture at the Stuttgart State Academy of Art and Design and from 1993 to 2009 at the Weißensee Academy of Art Berlin. She participated in Documenta 5 and was represented in solo exhibitions since the 1970s including at Von-der-Heydt-Museum in Wuppertal, Kunstmuseum Düsseldorf, PS1, Institute for Art and Urban Resource in New York, Künstlerhaus Bethanien in Berlin or Württembergischer Kunstverein in Stuttgart. Her works have also been exhibited in numerous group exhibitions, for example at Hamburger Bahnhof in Berlin, Reykjavik Art Museum, Kunstmuseum Malmö and most recently in 2019 at the Hirschhorn Museum in Washington. Inge Mahn lives in Berlin and Groß Fredenwalde.