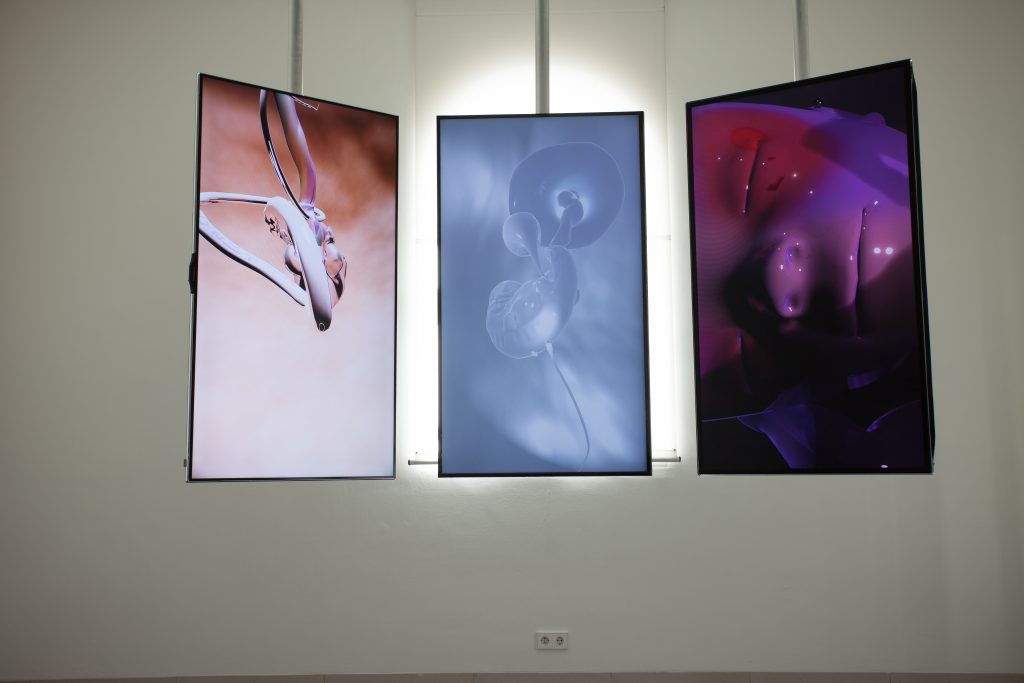 In Schrödinger’s Baby, TZUSOO alludes to the popular thought experiment devised by Austrian physicist Erwin Schrödinger in 1935. Schrödinger proposed a scenario in which a cat is locked in a box with an unstable radioactive atom that could potentially begin to emit radiation and release a toxic gas. However, there is no way to say with certainty when or indeed whether this will happen without opening the box. The result is a paradox, with Schrödinger asserting that the cat enters a state of superposition that makes it impossible to say whether it is alive or dead. The South Korean artist translates this famous paradox into the reality of her own life, creating a digital baby in virtual space. Based on her inner grappling with potential motherhood, TZUSOO bought the digital model of a developing embryo, refining it according to her own ideas. She is free to determine the sex, skin colour and other characteristics or to dispense with all specifications so as to avoid stereotyping. In Schrödinger’s Baby, TZUSOO thus discusses core aspects of her work including reflection on gender and origin for which she also draws on her personal experience as a South Korean artist in Europe. Being a digital native herself, TZUSOO often uses virtual technology applications in her work, creating avatars that operate in dreamlike settings oscillating between devastated landscape and hyperreality. This contrast of utopia and dystopia may also be seen to refer to all-embracing digitisation and its development. The future is not imaginable and it is not possible to foresee how the further development of artificial intelligence will play out and which ethical questions will need to be discussed in the course of this transhumanist discourse. For example, what will the possibility of digital surrogate motherhood entail and what responsibility do we have for the avatars we create or indeed they for us? TZUSOO’s works raise many questions connected with the current uncertainty of rapid digital development. We have long since reached the end of thinking in terms of linear progress and we now find ourselves in a world of exponential digital development. The experiment is therefore already in full swing, and in this digital world humanity is facing questions that we will only be able to answer when the future has become the present and we have opened the box.

TZUSOO (*1992 in Seoul, lives and works in Stuttgart and Seoul) studied Art Studies at the Art College of Hong-ik University in Seoul and has been studying under Christian Jankowski at the Stuttgart State Academy of Art and Design since 2017. In her work the artist experiments with shifting borders by virtually merging the reality and non-reality of objects. The main themes of her work are a deeper scrutiny of social minorities, the conditions of work in the digital age, sexuality and gender. According to TZUSOO, her works always combine a core sociopolitical interest with her own (lived) experience. TZUSOO has exhibited in group shows at Museum Folkwang in Essen (2017), Künstlerhaus Stuttgart (2018), at the 4th Youth Biennale in Bolzano, Italy (2018), at E-Werk SAAL in Freiburg (2019), and at the Gallery Damdam in the Embassy of the Republic of Korea in Berlin (2019). The artist held a scholarship from the Korea Student AID Foundation from 2011 to 2017, was artist in residence at V2_Lab X Art Centre Nabi in Rotterdam, and received the DAAD Prize in 2019.

The exhibitions in the SCHAUFENSTER JUNGE KUNST are supported by the Helmut-Fischer Foundation: