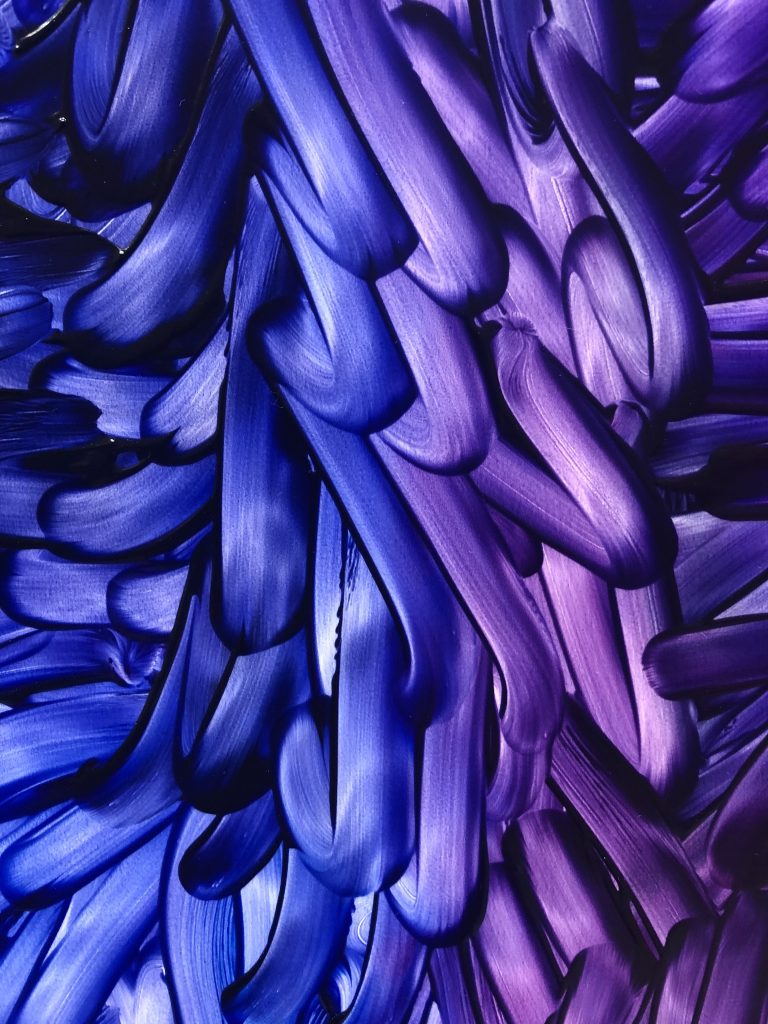 In his late work series Peter Zimmermann generates images by transferring digital patterns onto the canvas brushstroke by brushstroke. Eventually, hundreds of brushstrokes seemingly arranged in a random composition produce a whole. At first sight they seem to be put together in an arbitrary arrangement, like a swarm, however, as a whole they make for a three-dimensional composition in which every single brushstroke is still recognizable.

The making of his large-size epoxy resin works follows the same principle, whether it‘s on the floor or on a material like Forex®: He projects the computer simulation onto the respective medium emulating the image layer by layer. The epoxy resin‘s glazing property allows the individual layers to shimmer through.

Zimmermann expands his repertoire, for the first time he shows an animated piece of video art he had created for the Oktogon. The clip illustrates the production process all his works undergo. Additionally, he‘ s going to make works from stickers: A long frieze that looks like a 3-D wall object, an effect created through the monochrome nature of the rectangular stickers, will run through the entire exhibition.

This grand retrospective will occupy a total of eleven gallery spaces, showing a vast spectrum that covers artworks of all sorts of media, however, every single object occupies its unique spot in the overall conception. Peter Zimmermanns devises his works over and over again, always adapting them to the on-site conditions.

Peter Zimmermann (*1956 in Freiburg im Breisgau / live and works in Cologne)
Peter Zimmermann counts among the most acknowledged conceptional representatives of Media Art. He combines complex graphic algorithms with his preferred materials, among them we find epoxy resin, acrylic- and oil paints. Between 1979 and 1984 he studied at the State Academy of Fine Arts Stuttgart. K.R.H. Sonderborg was among his teachers. He held a post as professor at the Academy of Media Arts in Cologne from 2002 to 2007. Zimmermanns’ works are masterpieces of abstract painting and can be found at, to name but a few, acclaimed institutions like the Museum of Modern Art in New York, the Neue Galerie Graz in Austria, the Museum of Fine Arts in Boston, the Fondation Cartier pour l’art contemporain in Paris, and the New Orleans Museum of Modern Art. Zimmermann‘s works have been subject of many group and solo shows, for instance at Nunu Fine Art in Taipei, at the Gaa Gallery Provincetown in the USA, as well as at galleries and museums in Great Britain, France, Denmark, Russia, China, Switzerland and Germany.